Spring 2014: Between working on two books I am organizing a work trip to turkey. I write for a clients website and the VDI nachrichten about biogas and do interviews, with fishers from Schleswig-Holstein about the perspectives of coastal fishing, for a (new) regional magazine.

There is lots to do. And all this in the middle of medial change, where no one knows, where the road will lead us to. Cluelessness in many places, while the flood of information and images is bigger than ever. Perception, attention and appreciation of topics like the environment, climate, food, landscape, global justice and the human relation to the material are suffering. Put simply: There is a demand for journalists, authors and artists that will work on those questions. I want to contribute to this.

Born 1964. I grew up on the North Sea island Pellworm and and absolved agricultural economics, did my Abitur and went to Hamburg in 1985. On St. Pauli I did my community service working with the elderly. My journalistic career began with an internship at the taz hamburg; internships at the Hamburger Rundschau and the Hamburger Morgenpost followed. I finished studying history, economics and geography with my Magister Artium in 1993. Right after my studies I began working as a freelance journalist. Mostly for dailies and magazines in the beginning.

In 1995 I became part of agenda. Fotografen und journalisten a consolidated company. Henceforth I worked together with photographers on reports in Germany and abroad. The topics mostly revolved around agriculture, renewable resources, renewable energies, development policy and also cultural phenomenons.

Parallel to this a number of photo and text exhibitions and happenings like „indian stories between tea and t-shirt“, „fields of the world“, „Bollywood for a night“, „Watt“, the traffic island project „diversity“ and „Uruguay natural“ came to life. In 2008 I left agenda and went new ways. Alongside my work as a freelance journalist for online newsletters, papers and magazines and a number of books and brochures, I started moderating events. On top of that I gave presentations, engaged in cultural and sport related projects and advised several companies in their public appearances. Since 2013 I am a member of Freischreiber. 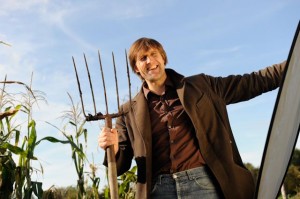