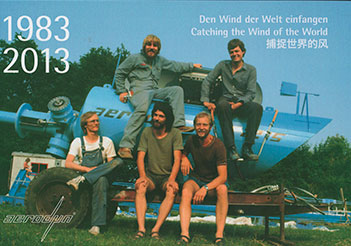 The history of modern wind energy utilization is still young compared to the time dimensions in which historians usually think. Apart from a few antecedents, utilization of windy energy for power generation only really gathered momentum after the oil price crises of the seventies. Back then, the time was “ripe” for it, as increased prices, criticism of nuclear power and thoughtless consumption of energy reached a critical point socially. This was an ideal prerequisite for looking for “alternative energies”, as it was then known as.

However, many pioneers saw that they were greatly mistaken as they had believed technical and economic success to be within fast reach during that period of widespread optimism. Many failed, they were too naive and did not have any apt technical concepts. Indeed, only a very small number of firms that were founded then have survived to now. One of these is aerodyn Energiesysteme GmbH, and consequently, the history of the entire wind energy industry is also reflected in the history of this company. This book will relate why aerodyn in contrast to many other competitors survived the tempests.

It was an exciting but also arduous path until the Renewable Energies Act (2000) signalled a paradigm change in the energy industry: Since then, the renewables have priority over fossil and atomic energy. In the period that followed, wind energy experienced an industrial breakthrough at least in Germany. In those years, aerodyn had already processed the stirring turbulences of the early period and thus had already overcome many a crisis. At the dawn of the new century, the engineering firm in Rendsburg had grown to be a reputable figure in the wind energy industry. Sights turned to offshore and the Far East. Managing Director of the company, Sönke Siegfriedsen, seized the opportunity and entered the Chinese market with a great deal of energy and passion. This venture was rewarded. In this way, aerodyn contributed significantly with its wind turbine designs and installations in China and in many parts of the world to a more decentralized and climate-friendlier energy economy. The great success of the past is impetus for the future.